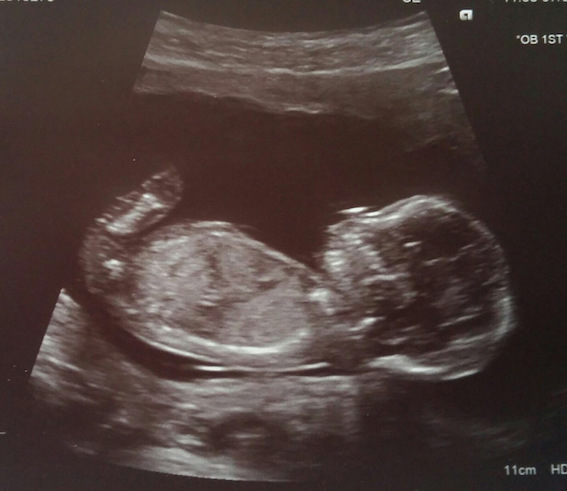 Everyone talks about “rainbow” pregnancies and what a blessing they are.

Joy of a rainbow

It is very true that when we were expecting Arthur we were overjoyed and all of a sudden we had a new lease of life.  We had hope for our future, as a family and truly believed the sun was shining on us again.

Yes we were still immensely sad about Violet and our grief for her was still strong but we had a renewed sense of optimism towards the future especially after we had Arthur’s 16 week scan and they confirmed that unlike Violet’s his heart looked ok.  We were ecstatic and so relieved that we genuinely looked forward to his 20 week scan as they would double check his heart again in more detail but if there were any slight abnormalities then they would be minor.

We were so pleased and reassured by his 16 week scan results that we even felt confident enough to let friends and others know we were now expecting.  That in January 2018 Violet was going to be a big sister.

Then we had the 20-week scan.  Arthur’s heart did still look ok but what didn’t look right was his brain.  The sonographer wouldn’t/couldn’t tell us too much other than his brain didn’t look how it was supposed to look and she would have to refer us to a top specialist.  Our world crumbled.  We then had to wait over a week before we could see a specialist to get more details.

We were heartbroken. The fact that something might have been wrong with his brain hadn’t even dawned on us, as we almost expected a heart defect and as we knew from our experience with Violet that wouldn’t necessarily have been a deal breaker as a heart can be fixed but a brain?  The interim week waiting to see the specialist was one of the longest in our lives and in the meantime I could feel little Arthur kicking and wriggling around much more hyperactive than Violet had been.

You can’t repair a brain

When we finally saw the specialist he explained that Arthur’s brain had declined and become even more severe, just in the week since our previous scan.  The issue was the amount of fluid in his brain, which was already so vast it had crushed most remaining parts of the brain including the area responsible for reflex and animal impulses like breathing and swallowing. The increased movement from Arthur was put down to the nerves being over stimulated by the fluid sloshing around his brain.

His symptoms weren’t even anywhere near the borderline and in fact he was so beyond this that the prognosis was that he might at best reach 30 weeks of pregnancy and then would die.  His head would be so large and full of fluid that he wouldn’t be able to be birthed and would have to be removed through caesarean section, which could have complications for me too and given my age we were told if we still wanted other children then losing him earlier would be the kindest option for everyone.

We explored every alternative but I couldn’t bear the thought of my little boy suffering (incidentally his deformity had affected him so badly that they couldn’t even identify his gender through the scan) and it wasn’t until I birthed him at 22 weeks that we realised he was a little boy.  Having to end his life was the hardest decision we have ever had to make but the thought of him suffering and declining further was too much to bear.

Having to give birth to him was traumatic and extremely upsetting.  We did get to meet our little boy while he still looked like a healthy but tiny baby and he was beautiful like a miniature version of his daddy with dark brown hair.  We spent several days saying goodbye to him in hospital and gave him a funeral service before burying his ashes with his sister almost a year to the day that we lost her too.

We will never forget our little boy and we miss him more than imaginable but it is a very different type of grief to that that we have over Violet. We knew her, shared experiences together, heard her laugh, babble away incessantly and have a million photos of her that we can look at too.  In a way this makes it easier as we have constant beautiful reminders of our memories of Violet.  I find I’m much angrier at the world over Violet because she had battled and overcome so much in her short life that it feels much more cruel for her to have been taken away as she was.

The world can be cruel

Grieving Arthur is much more difficult as his loss so early was our decision however his brain abnormalities weren’t and he would never have survived to full term anyway.  Never been able to breathe or swallow unaided if he had survived to full term.  It is the cruelty of us having to endure this on top of losing Violet that I find very hard to bear.  I remember screaming “how much pain do they want us to go through”, “what have we done to deserve this” and “how cruel is the world”.

People talk about rainbow babies and how they are “God’s gift” well Arthur did fill us with hope for the future before it was cruelly ripped from us again.  I’m often asked why I don’t believe in God and this is the reason why.

Now we are struggling to discover what there is “somewhere over the rainbow” or as I like to say we are somewhere after the rainbow; what happens when you’ve had a rainbow and it is faded and disappeared?

We look for the next one I guess and try to keep positive.