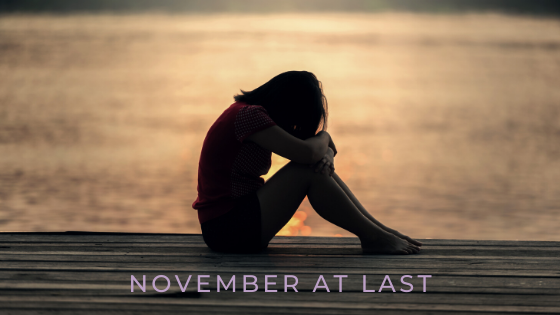 November is here at last and I say that not because it is a favourite month but just because October is finally over.  This year it was particularly tough.

I was supposed to be visiting Lisbon last week for my mum’s birthday treat but had to pull out and left her with my sister as my little rainbow baby was poorly so I couldn’t leave her at all.  The illness of my daughter combined with Baby Loss Awareness Month was the main reason October was super stressful and a tough month for us.

Our rainbow baby was the same age as Violet was when she died and she contracted pneumonia twice, which was exactly what happened to Violet before she was admitted to hospital never to return.  This is why this past month has been so fraught for us resulting in hardly any sleep; stress levels beyond belief, emotional meltdowns on a frequent basis and the consumption of a vast amount of comfort food/drink on a regular basis.

We also managed to still juggle work commitments, the organisation of a surprise birthday party for my mum and even had a drink out baby free for an hour or so for a friends birthday before hot footing it back to soothe a poorly baby.

Health wise my daughter is luckily recovering well but we’ve decided to keep her away from nursery until the new year at the earliest to allow her lungs to fully recover and to ensure her immune system is back to full strength too.  We will continue to juggle work commitments and childcare thanks to the support from family and friends.  There’s no way we will risk losing this little girl too.

It sounds strange but today I feel a little relieved because yesterday our rainbow reached the exact same age Violet was when she died so today she has surpassed her sister’s age by one day.  It makes no logical sense why I feel relief at this but my stress has lifted slightly.

Is this normal with rainbow babies?  Anyone else feel this way too?  Or am I just odd?  Please let me know.

So now we’re on totally new parenting territory as we have the oldest living child we have ever had and it’s all fresh new sailing for us from now on.

Hope you’re having a great start to your month!

Once you’ve got your rainbow

These last few weeks have been especially difficult for us as our rainbow baby is sick. We had to take her into hospital where she was diagnosed with pneumonia, which is what her sister died from. Back at home now luckily and she’s responding well to antibiotics but it is unbelievably stressful anyway without our history with her sister.

I realised a key reason for the stress of having a poorly child or loved one or heaven forbid their loss is the lack of control over the situation (unless you’re a murderer of course but that’s a different story!).

The fact you had no control in the end over whether they survived or not. You did everything you could possibly do but even that wasn’t enough and it is the acceptance that at the end of the day we really don’t have control over these things.

When our children are sick, again, it is the control issue that makes us super stressed. We can do everything we can possibly do to look after them. Give them antibiotics, fluid, pain relief, and take them to the doctors or to hospital. Listen to the “experts” and follow their guidance. Other than that there isn’t much more we can do. We are powerless and have to do our best then simply hope.

I think that is why after the loss of Violet and then Arthur doing things I have control over helped me to regain a little of my sanity.

Managing a house renovation and extension project was something I could control. Rehabilitating a German Shepherd from being a working dog into a family household pet again I could do and get some comfort from. Setting up a fund in Violet’s memory and organising a charity ball again was something I could control and work at organising. We have now raised a total of £42,860 for Alder Hey Children’s Hospital.

More of a control freak

Yes I admit I am probably more of a control freak in some respects than perhaps other people but after speaking to a few others who have had to endure looking after sick children or unfortunately baby or child loss it is this loss of control that is a tricky one to deal with.

My advice is to try to do other things you can control to try to balance out those things that you simply can’t.

Big hugs and lots of love

When you finally get your rainbow what then

Some of you who read this blog, know me or just follow me on social media may be aware that my daughter Violet died at the end of September but what you might not realise is that her funeral coincided with baby loss awareness week 2016.  The second anniversary of that is today.

At the start of this week in 2016 we got the news that the coroner was releasing her body so we had to finalise things with the funeral directors and to make arrangements for her funeral, including making decisions like cremation or burial. We decided to bury her because I couldn’t face the idea of my baby being burned. Crazy I know as she was dead already but I still felt as though I was protecting her little body by burying her instead. Then we had to decide where to bury her and to pick a plot.

We decided on southern cemetery as it was close to where we live and there are lots of important and respected people resting there. I know it seems ridiculous but I felt as though she’d be in good company alongside Elizabeth Gaskell and Anthony Wilson – if it’s good enough for them then….

I remember us visiting Southern Cemetery and one of their team taking us to show us the baby section of the cemetery. They explained there was only one of these tiny plots left beside the road going through the cemetery. It was a small plot surrounded by other little baby graves. Next to it was a communal baby grave shared by many that must have had them all stacked on top of each other as though they were on a supermarket shelf. It made me feel ill and I decided over my own dead body would she be buried here.

Investing in the future

I asked the cemetery man was there not anywhere else and he said we could have a family burial plot but that would be more expensive. I said “fine she’s not being buried at the side of a road even if I need to put it onto a credit card”. I asked him to show us what they had available. He showed us several plots and one was under a big cherry tree opposite the grave of Kirsty Howard, the amazing girl who was so brave and raised so much money for Francis House. I said that one would do. None of the plots were acceptable or perfect because my baby being dead wasn’t acceptable. Our final choice was simply the least offensive and I strangely felt comforted knowing that Kirsty would be her neighbour. I hoped being kind and compassionate that she would look after my little girl.

In the middle of Baby Loss Awareness week 2016 I wrote Violet’s eulogy.  I wanted to ensure her send off did her memory justice and that everyone would know exactly who she was and would understand why we loved her, as much as we did.  We selected her favourite songs for her funeral, a close friend agreed to give the service for us and we thought about what she would like. I know she was only 15 months old but she had very strong opinions and preferences on things. She loved balloons so we asked everyone to bring a balloon to her service. She liked to make people smile so we arranged for all the balloons to be collected then taken to the children’s hospital and her nursery.  We set up her fund in this week too for Alder Hey hospital’s cardiac surgery fund and asked people to donate to it.

The day of her funeral, the 14thOctober, was the penultimate day of baby loss week 2016. I remember it was a crisp autumn day with blue skies and sunshine, even though there had been bad weather forecast we only had high winds that day. I went through the day in a bit of a trance almost as though I was an outsider looking in and I carried the angel bear that I had been sent the day before. I cuddled and sobbed into the bear throughout the service. The bear was a gift from an amazing little charity called Heart to Heart UK that also gifts bravery bears to children undergoing heart surgery.  Their gift really helped me.

The day after Violet’s funeral was the last day of baby loss awareness week. All around the world people lit candles at 7pm creating a wave of light in memory of all the babies lost. We lit a candle in our empty quiet house full of sympathy flowers and cards then we cried some more and had a drink.

I decided to write about our week in 2016 because sometimes you don’t think about what parents have to go through logistically just after their baby dies. You almost forget that they have to make important decisions during this most horrendous time.  Decisions about choosing a funeral director and whether to bury or cremate? What to do for a service? Whether to ask people to donate to charity and if so which one? All these things would be difficult enough if your child hadn’t just died but they have. The world as you know it has just ended. The most important person in your world has gone and you have to make these decisions.

So please join in with celebrating the end of child loss awareness week by lighting a candle at 7pm on Monday to join the wave of light. Also have a drink with us as we mark the end of the anniversary of probably one of the most difficult weeks of our lives.

Thinking of our lost babies Violet and Arthur this week but about our darling daughter today.  The day we laid her to rest with music, balloons and colour just how she would have wanted.