This week has been a really challenging one for me because my baby has been properly poorly for the first time.  Yes we’ve had teething pain, the odd tummy bug and reflux issues but this time she has a very nasty cold bug that’s affected her chest too.

Now you might be thinking having to look after a sick baby is hard for any mother or parent and yes it is but when you’ve previously had a baby get sick and die it makes the experience all the more stressful.  Especially when your other baby died of lung problems and now your new baby is choking and coughing in her sleep.

The doctor has said it’s just a cold so you’d think just give the child some calpol and vapour rub and get on with it.

Well just getting on with it is easier said than done. My hubby was also away so I was flying solo too (hats off to all those single parents out there you deserve medals!).

The reality was that I didn’t get any sleep at all. Part of the night she was awake distressed after coughing and wanting cuddles. The rest of the night she slept in fits and starts repeatedly coughing and choking in her sleep. Cue mummy leaping out of bed every time. Sprinting across the room to lift her head and rub her back trying to ensure she didn’t breathe any phlegm back into her lungs.

Of course I also put a folded blanket under her mattress to ensure she was tilted to help with congested breathing, a tip we learnt from caring for her sister.

Holding baby while she sleeps

The following day aurora was still not herself so whilst most mummy’s might have tried to nap whilst baby did. I held her propped up while she slept so preventing her from choking on any phlegm and ensuring when she did cough that she definitely coughed or vomited outwards. Her sister they think breathed vomit into her lungs so this is now our worst nightmare for Aurora.

You might wonder why I’m even taking the time to tell you all this. Whilst I don’t want to over share or make anyone feel sorry for me. I’m thankful for my baby and don’t want to complain. Lots of people think once you finally get your rainbow baby then that’s it job done. Well it’s only just begun really.

The stress and worry now Aurora is ill is unbearable as when I do manage sleep I get flashbacks of her sister, Violet, in hospital and immediately after she died.

What are the chances?

Most parents will stress and worry about their babies for their entire lives, that bit isn’t a new phenomena, but I guess most believe their child dying won’t happen to them. These things always happen to other people. Well when the unthinkable has happened to you already then you’re more likely to worry that it will happen again.

I’ve seen what hell looks like and I’ve experienced unspeakable pain.  I have sat by the side of a hospital bed for days and nights on end.  I have had to hold my screaming baby down while she is tortured by doctors with needles and tubes all trying to do their jobs.  I’ve stifled back my own crying and sobs so as not to distress my poorly child.  I’ve told my crying child that all of this is to make them better and lied that they will be ok.  I’ve begged and pleaded with emergency intensive care teams not to give up on resuscitation but nothing is worse than the nightmare of your baby actually dying.

You can’t un-see or forget your dead baby’s face. How their cold lifeless body felt? How clammy the skin? How soulless their eyes? Almost like a doll has been made of them. They don’t seem real somehow.  I can tell you that hell is watching your child in pain, being tortured and then them die.  Then you have to arrange their funeral before somehow going on with your life.

I never ever want to go back there again thank you.  If to ensure that doesn’t happen it takes staying awake to check Aurora throughout the night then so be it.  If I have to hold her while she sleeps then I will do.  Anything I need to do I will do it.

I also keep having to repeat the same mantra over and over in my head.

“This is a different baby. A different person. She isn’t the same. ”

To all those parents out there with rainbow babies or those caring for children who are sick my hat goes off to you too.  Sometimes it’s tough being a parent.

Have you read these other posts about Rainbow babies? 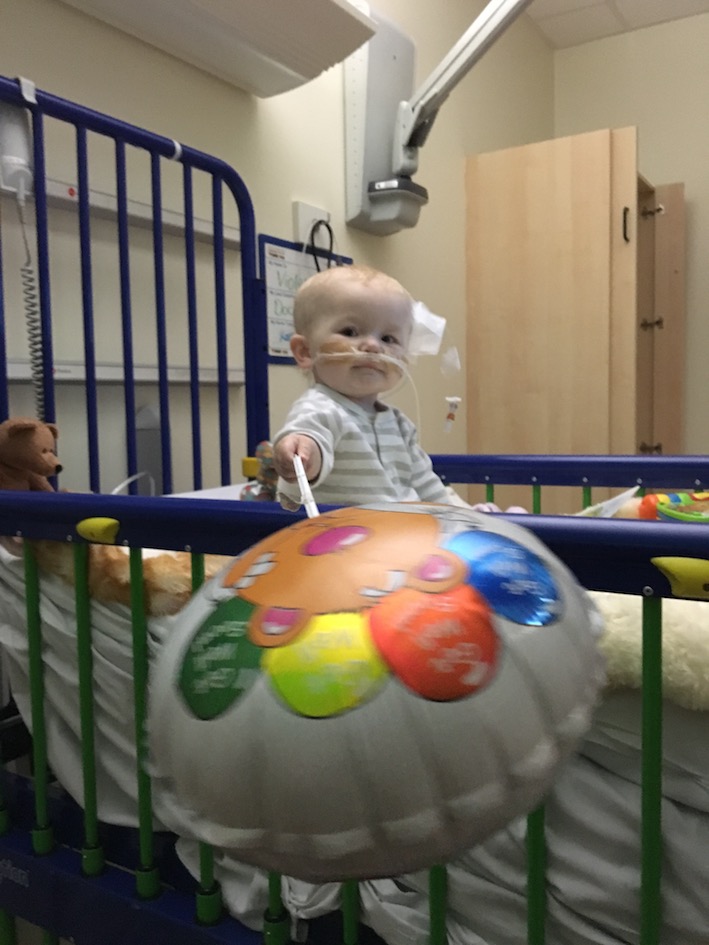 Unless people have been through something similar themselves, they don’t really understand that when you’re grieving, yes you go through waves of sadness, anger and frustration at the world but there’s a huge element of anxiety too.

The anxiety affects every aspect of your life. Almost as though because the worst thing ever actually did happen, then what’s to say something else bad isn’t possible too. This heightened sense of danger makes you nervous and afraid of things that previously you wouldn’t have been concerned about.

Like this week the road outside our house was very icy and there was a time I wouldn’t have cared but I was reluctant to go outside, as I know how accident-prone I am. The thought of falling and injuring myself was too scary to contemplate.

I find myself constantly trying to avoid risk, whereas as an entrepreneur for many years, risk and calculated odds was something I excelled in. I could easily identify what to take a chance on and what to avoid based on pure instinct. I no longer trust my own instincts.

The morning my little girl died the hospital said she was doing really well and I could see with my own eyes she was better than she had been for weeks. We were all so very happy. I messaged everyone with photos showing how well she was doing. I thanked every single God that she had turned a corner. That evening she died suddenly and I realised that my eyes and instincts could lie. Also that medical specialists don’t know everything. That deeply affects everything else in your life. It makes me question it all. All of a sudden is “green” really green?

Not only do I question my instincts more but I also worry about things I never used to. I constantly question everything…

These constant niggles and questions I now ask myself all the time. They started when Violet died and they aren’t going away.  They increased even more after Arthur died, as he gave us so much hope for the future and then our world became doomed once again. These thoughts now chip chip chip away at my confidence in every area of my life, so some days I almost feel like I shouldn’t even bother. I find it a real challenge to drive myself onwards, often having to give myself evidence as to why certain things aren’t true. Why some things aren’t the case.

I’m seeing a great counsellor, finally (as I have been through a few, some who I made cry & others that ended up being aggressive with me but that’s a post for the future!). They are trying to help me to work through these issues.  You don’t usually hear people talk about confidence and anxiety when they’re grieving but I’m learning now that it is far more common than you think.  Quite a few people I have spoken to who have lost a loved one have said that it also really affected their self-confidence.

Thank you to you all for your patience with me and for helping me to believe in myself again!

The challenge of a rainbow pregnancy

PTSD with a rainbow pregnancy

I have my rainbow what now?